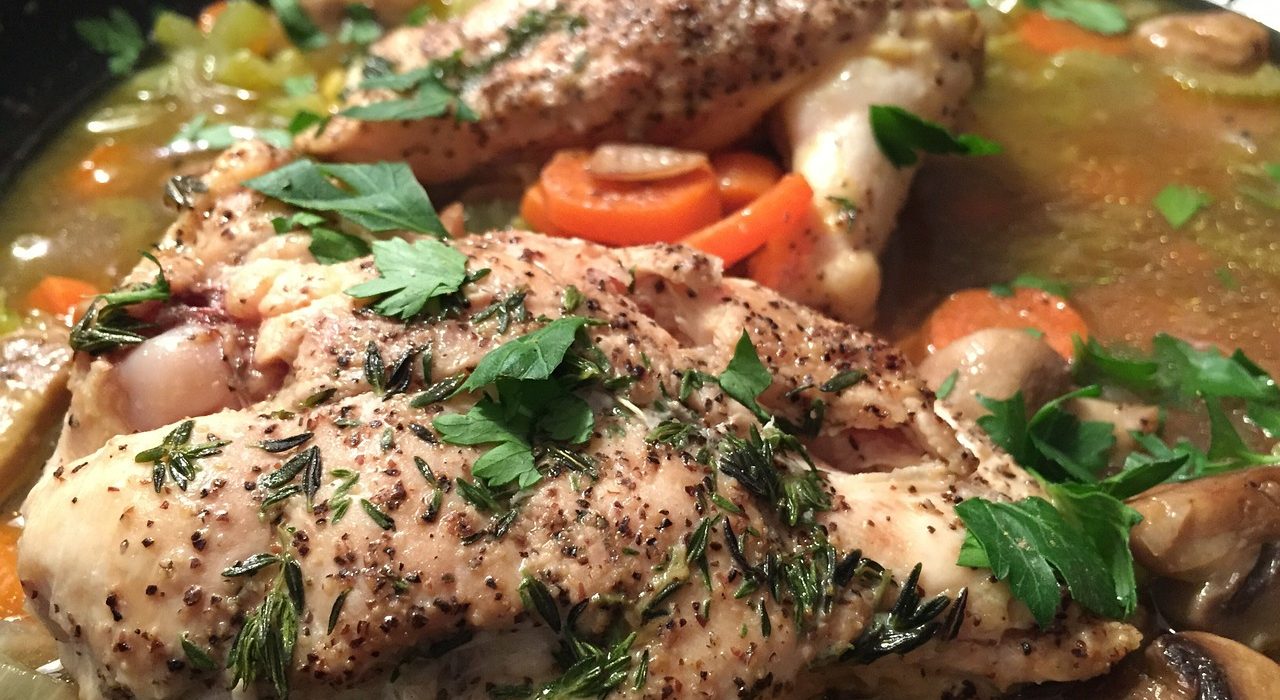 Poulet basquaise or Basque chicken is one of the most famous traditional Frensh dishes. Specifically, it is a traditional culinary speciality emblematic of Basque cuisine, extended over time to French cuisine, based on chicken pieces in a mediterranean piperade (a confit of tomatoes, red and green peppers, onions, olive oil, garlic, white wine, bouquet garni, more or less seasoned with pepper and Espelette chili).

The chicken à la basquaise is in the colours of the Basque flag (red, green and white). It is traditionally simmered and served with a piperade, in an earthenware casserole, a cazuela, or a cocotte, and can be improved with Bayonne ham…

A great traditional French recipe, Basque chicken is a regional dish that has become international. Born in the Basque Country, this traditional dish is rather easy to prepare and brings many flavours, in particular thanks to its sauce, the basquaise sauce.

If we don’t say “Basquais” instead of “Basquaise”, it’s because the origin of the dish lies in its famous sauce. Created in a region to the east of the Basque Country (in the Soule area), Basquaise sauce, also known as piperade, is made from tomatoes, peppers and several spices.

Initially, Basque sauce was made with bread and vegetables. The sauce gradually evolved into what we know today. The bread has disappeared, but the vegetables remain. Used to accompany tuna, it is best known for accompanying a good chicken.

Cooked in a casserole dish, chicken basquaise (or should we say “à la basquaise”) is one of the essential recipes for good cooks.

Of course, the recipe can be adapted to suit your tastes and the ingredients you have available.

The recipe for Chicken Basquaise is not a complicated one, since the main part of the recipe is the preparation of the sauce that accompanies the chicken.

Here are the Ingredients for 4 people:

Then prepare a casserole in which you can put a few tablespoons of olive oil (ideally 4 tablespoons). Wait for it to heat up a bit, then put in the garlic, onion and pepper pieces. Fry them for about 5 minutes on low heat to avoid burning them. Take the tomatoes and cut them into strips as well. Don’t forget to peel the tomatoes before cutting them. Add them to the mixture in the pan and leave to cook on a low heat for about twenty minutes. Remember to cover the pan. You can stir from time to time with a wooden spoon.

In a separate pan, or sauté pan, add one or two tablespoons of olive oil. Once your chicken is cut into pieces, fry them in the pan.

If you don’t want to use a whole chicken, you can buy chicken pieces directly.

Chicken breast and thigh pieces, mix all the pieces in the pan and salt them. You can also add a little pepper (Paris cooking class).

Don’t forget to turn your chicken pieces regularly to grill all sides.

Once you have allowed the 20 minutes for the tomatoes to cook, add the chicken pieces to the mixture. Add the bouquet garni as well.

Pour the white wine into the pot and simmer for another 35 minutes. This way, the chicken will take on the taste of the basquaise sauce.

Your chicken basquaise is ready!