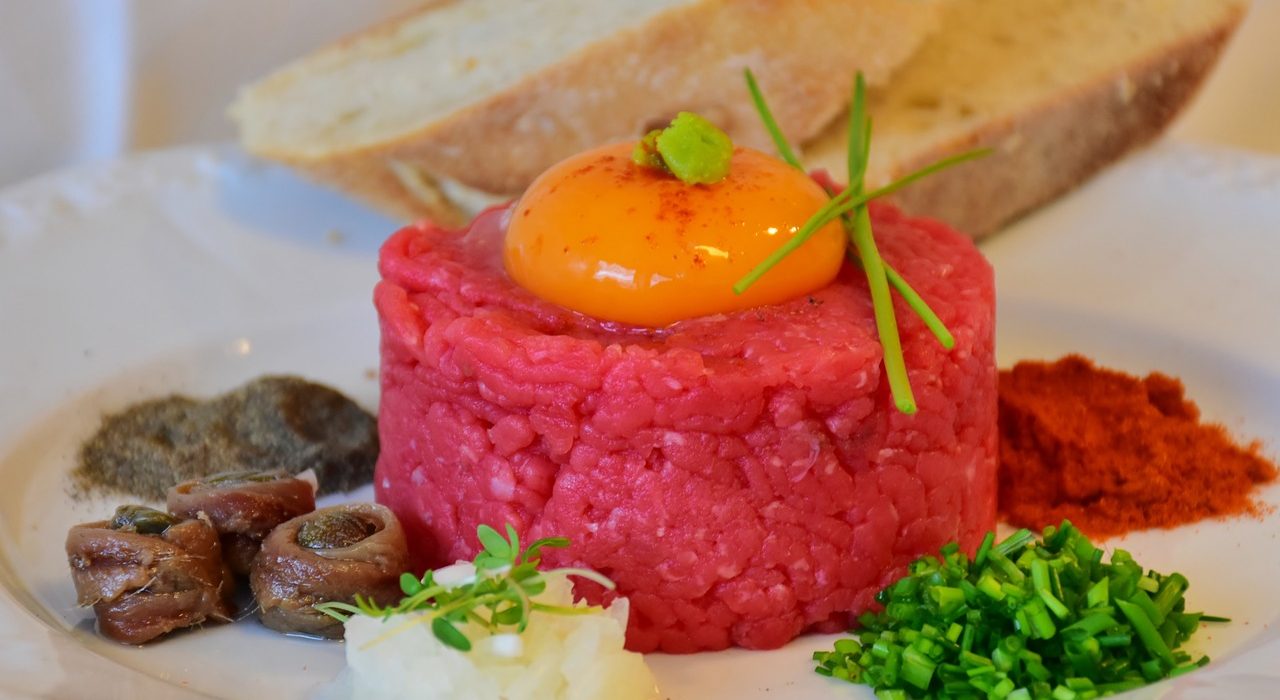 Tatare is minced beef made from high-quality, sinew-free and low-fat muscle meat such as tenderloin and is more finely minced than plain minced beef.

Tatar is usually enjoyed raw as beefsteak tatare. It is accompanied by boiled eggs, raw onion and white bread.

A classic beef tartare doesn’t have much to do with barbecuing at first, but at second glance it is a perfect accompaniment to a successful barbecue or similar event.

“Beef Tatare”: A Play with Beef and Spice

It disappeared from the menus for a long time, but for some years now “beef tartar” has been celebrating a return to the top restaurants. However, little has remained of the classic spices.

Cut, season, serve. It couldn’t be simpler – and yet “beef tartar” is a supreme discipline. The raw beef mixed with all kinds of spices can now be found in the country’s top restaurants again after a period of abstinence. In many French restaurants today, it’s back to the roots. A lot is coming back, including pickled and raw meat. However, every chef has his very own variation, because the simple dish can be flavoured with a wide variety of spices and ingredients and refined individually.

An interesting variation we once enjoyed was served with sweet red onion cream and pickled onions on the plate. Despite these refinements, the meat and its taste are always in the foreground. Good quality meat is very important for beef tartare.

The low-fat and sinew-free beef fillet used for this (a rump steak or lung roast tips are also conceivable) should be fresh and not matured. When preparing and serving, it is important to work as quickly as possible without exposing the meat to great heat. Chopping the muscle meat into small pieces increases the surface area. Germs could multiply particularly easily.

The meat is therefore taken out of the refrigerator immediately before serving and is processed straight away. For the top chef, only a knife is used and not a mincer, which would destroy the tender structure of the meat. When it comes to the subsequent seasoning, opinions differ.

“It’s a shame to season it too hot, because then the meat flavour doesn’t come out,” we once heard a chef explain. Apparently, the dish actually comes originally from France. Beef tartar’ is said to have first appeared there at the end of the 19th century. The spread of refrigeration made it possible to eat more fresh meat. It got its name from an Asian equestrian tribe. The Tartars were said to eat a lot of raw meat. However, the name and the spices used are certainly a recent phenomenon.

The omnipresent toast with butter is left out by the French. This side dish has become established in other countries, such as Austria. The French prefer baguette with it. In Germany, spicy farmhouse bread is sometimes served with steak tartare, while an Italian version would be more like aromatic focaccia, for example.

Tatar is a cold dish with raw beef and egg yolk. So if you can’t / shouldn’t / don’t want to eat raw meat or unheated egg yolks, this recipe is not for you. For all meat lovers, however, tartare is just the thing.

To be more precise, it is lean beef, mostly from the rump or the tenderloin, which is quite finely chopped, but not put through the mincer. So it’s not minced meat, but finely chopped meat. Note the difference.

There are also some tasty ingredients and, to top it off, a raw egg yolk. Most of the work is in cutting the beef, but with the right technique this is also an easy task. Of course, it would be easier to buy the already mentioned minced beef, but the taste and especially the texture in the mouth are clearly different than with sliced beef. So let’s get started and prepare a delicious Beef Tatar!

Preparation: How to make Steak Tartare

Finely slice the beef tenderloin or beef rump and place in a bowl. Finely chop the cucumber, capers and shallot and add. Then add a teaspoon of mustard, 1 tablespoon of ketchup and salt and pepper and mix well.

Finally, add a dash of sherry and an egg yolk and mix well. However, do not stir too much so that the tartare retains its consistency and the egg yolk does not bind too much. Season the tartare with salt, pepper and a little sugar if necessary.

Toast the bread on the grill or in a pan with a little olive oil on both sides. Pick up some of the classic beef tartare with 2 teaspoons and form into dumplings. Place 2 dumplings on each slice of toasted baguette bread.